After Refurbishment Pictures in 2016.  “Before” pictures are at the end of this listing. 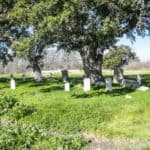 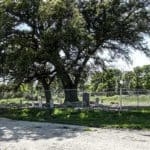 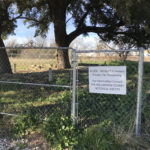 South side of E. Palm Valley Rd, 1/8 mile east of CR 110. But to get there, right at CR 123, 200 feet turn right on Axis Deer Trail past Business Park.  NOTE:  Roads have been reconfigured since these directions were given.

Find-A-Grave:  “Cemetery is located at the junction of Highway 79 and McNutt Road on the grounds of Infratructure Services, Inc, 5800 Highway 79, Hutto, Texas. Telephone 512 218 1133. From US-79 and SH-130, go west to the first signal (Tradesmen’s Park Drive on the north, Star Ranch Blvd. on the south). Go south on Star Ranch Blvd., cross the railroad tracks, and turn right on Benelli Drive. About 400 yards down on the right will be an unpaved driveway behind a locked metal barricade which you can walk but not drive around. The cemetery is at the end of that driveway under the two large trees and behind a chain-link fence.

As of July 1, 2010, the cemetery was abandoned and overgrown with ground cover, saplings, brush and vines, all of which seemed to have barbs to catch on your clothes. There were four crypts of which only one was intact. Remnants of broken gravestones were noticed in the ground cover. Since that date volunteers have cleared the brush and saplings away in the cemetery. During Nov & Dec 2012 nine broken gravestones were repaired reerected, the last three on 30 Nov 2012.

The land surrounding the cemetery, and the cemetery itself, were sold in February 2016. The cemetery is maintained by Jan Sharp, a descendant of some of the people buried in the cemetery. The developer got rid of the trees and brush, except for two large ones, and Jan covered the cemetery with rocks and had a mesh fence erected.” 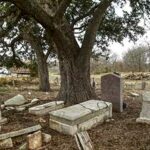 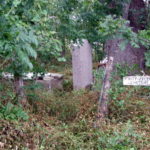