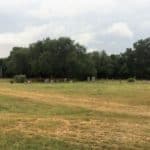 Construction of the Georgetown Dam & Lake began in 1972 and was completed in 1979 by the Army Corps of Engineers. The lake & recreational facilities were opened in 1981. Approximately 6 (plus an unknown) cemeteries (Bullion, Boultinghouse, Jenkins, Keating, Sawyer, Sedwich[k]) were moved from their original locations as they would have ended up under Lake Georgetown upon the completion of the dam.

The mapped coordinates are the approximate original site location for historical purposes. Bullion Mountain was an old settlement on the upper north San Gabriel River, 7 or 8 miles E of Rock House.