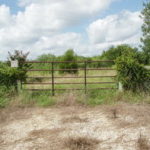 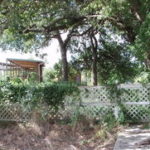 WCHC’s Vol I, pg 29: Per Alvin Ribbeck 1974 “The original Beaukiss Cemetery, which was moved to its present location [1550-2100 block of CR 474], stood where one grave STILL EXISTS. Three miles W of Lawrence Chapel on the R. C. Preston farm, near the road.”

Find-A-Grave per John Christeson: “From Hwy 79 in Taylor turn S on FM 619 to CR 473. Turn left or E on CR 473 & look for a mailbox on the right with the number 3555 on it. A short distance further E you will see a white wooden fence. Park at the iron gate in this fence & the Lorenzo Cooke crypt is to the right after you pass through the fence. If you reach the junction with CR 475 you have gone too far. The crypt was covered with vines & ground cover, but was easy to see. The gravestone is laying on top of the crypt & is broken in several pieces. There is an inscription that couldn’t be read on the stone & on the base of the stone still in the ground.”