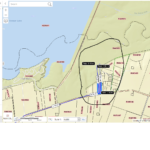 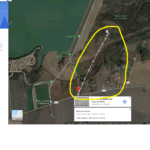 WCHC’s Vol III, pgs 169-170: Per Clara Scarbrough 1980… ‘located between Circleville & Hare. It is 7.2 miles E of the intersection of Hwy 95 & FM 1331; by following FM 1331 from this intersection, you reach the private driveway to the Roy Bernhardt home on the N side of the road. Drive to the side of the home, through a gap in the rear, then in a NW direction to an old black jack oak tree, near which the cemetery is located. The cemetery is .5 mile NNW of the turnoff from FM 1331.”

Survey notes in Deed 19567482DR:  “…containing in all 190.97 acres, of which about 0.10 acres is in a private cemetery or graveyard located approximately in the center of the tract…”