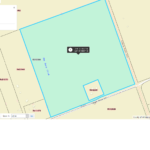 2019 Find-A-Grave [name of person giving information not given]…”This cemetery is located on the old Darrell Sybert farm on County Road 239, the first place south of County Road 234. The single inscribed gravestone is reported to be in a pasture on this property. Several field stones indicate the possibility of other graves.”

2016 Per Wayne Ware, “On 20 Dec 2010 I interviewed Darrell Sybert who stated he bought the farm of 117 acres in 1970 and sold it in 2000 to Jessie Espinosa of the Espinosa Sand & Gravel Company. He said that he knows there is a gravestone on the property, but that he had never seen it. He stated many years ago his uncle led a relative of a person reportedly buried there to the the gravesite and that is all that he knows about it. He does know that if it was an erect gravestone he would have seen it during the 30 years he was on the farm.”