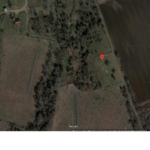 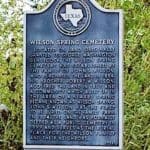 Per historical marker text:  Located on land originally granted to George Washington Glasscock, the Wilson Spring Cemetery was established by the family of John S. Wilson, who purchased the land in 1854. His brother, Robert W. Wilson, acquired the land in 1857, & a community which built up in the area of a nearby spring became known as Wilson Spring. John S. Wilson was the first to be buried on the family farm in 1874. The land was formally deeded as a public cemetery in 1899 and serves as the burial place for the Wilson Family and their neighbors.   (1988)    18″ x 28″ Official Texas Historical Marker with post