Marker Size:  Not made 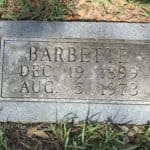 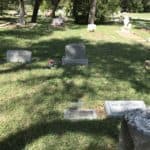 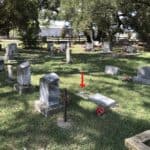 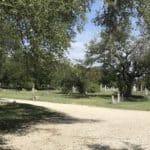 Address:  If, and when made, plans are to put historical marker at Barbette’s gravestone in the Round Rock Cemetery located at 1400 Sam Bass Road.

Additional Information:   Source:  https://www.roundrocktexas.gov/departments/planning-and-development-services/historic-preservation/local-legends/local-legend-archives/#2015:  2015 Local Legends  “Barbette was the stage name of Vander Clyde Broadway, an aerialist and female impersonator of the 1920s and 30s. As a child in Round Rock he visited the circus and became fascinated with the high wire act. He began practicing on his mother’s clothesline, and (according to legend) on the steel bridge over Brushy Creek.

After graduating early from Round Rock High School, he went to San Antonio to audition for the aerialist act The Alfaretta Sisters.  One of the sisters had died unexpectedly, and Vander was hired as her replacement when he agreed to perform as a woman.  He later incorporated this impersonation into a solo act that made him famous, and by 1923 he was performing throughout Europe at such venues as the Moulin Rouge and Folies Bergère in Paris.

While most aerialists of the day performed tricks, Barbette’s act was more theatrical.  He would perform on the tightrope and trapeze in full drag, then pull off his wig and strike exaggerated manly poses.  The provocative act made him the toast of the Parisian avant-garde; Jean Cocteau wrote that “I myself have seen no comparable display of artistry on the stage since Nijinsky.”  Cocteau later wrote an influential essay on the nature and artifice of theater called Le Numero Barbette, which was illustrated with images of Barbette getting into costume taken by surrealist photographer Man Ray.

In the late 1930s Vander suffered an illness (probably polio) and became an aerial choreographer and trainer for several circuses and films.  His work at Ringling Brothers was described as reinventing aerial ballet. Later he was hired to coach Jack Lemmon and Tony Curtis on gender illusion for the film Some Like It Hot.

He spent his last months in Round Rock with his sister, and died in 1973.  His life and work have also inspired more recent pieces, including the 1993 performance art piece Light Shall Lift Them and the 2002 play Barbette.  The Texas Historical Commission has recently approved [2015] an historic marker about Barbette, to be placed at his gravesite in Round Rock Cemetery.”