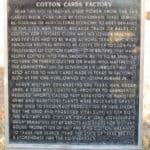 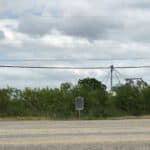 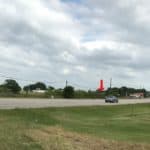 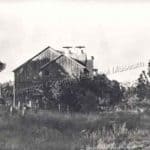 Near this site in 1862-65. Used power from the San Gabriel River. Chartered by Confederate Texas during re-tooling of agricultural economy to meet demands of the Civil War years. Because trade of bales of cotton for finished cloth was no longer practical, and textiles had to be made at home, Texas imported through neutral Mexico, at costs of $4 to $20 a pair, thousands of cotton cards — stiff brushes that made fluffy cotton into firm, smooth “batts” to be spun into yarn or thread, quilted or made into mattresses. The administration of Governor F. R. Lubbock (1861-63) also acted to have cards made in Texas, in factories such as the one here, owned by Joseph Eubank, Jr.

Heavy military demands (90,000 Texas men under arms; a 2,000 mile coastline-frontier to guard) plus reduced imports, caused fast expansion of industry. Arms and munitions plants were built, land grants were used to encourage production. Private effort met the need, and produced vital supplies for both the military and civilian populations. Confederate quartermasters set up depots and shops for military goods. Production of salt and “king cotton” was hiked to trade for scarce items. The State of Texas became a storehouse for the Confederacy.     (1965)