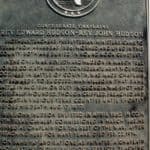 Brothers, teachers, Presbyterian ministers. Came to Texas from Arkansas, 1856. Worked and lived in this county. Both are buried in Round Rock Cemetery.

In the Civil War, Rev. Edward Hudson in March 1862 joined Co. G, 6th Regiment, Confederate army. Wounded Oct. 1862 in Battle of Corinth, was made chaplain afterwards, to succeed man killed in that same battle. In Aug. 1864, on duty in Georgia, was shot and critically wounded. Though crippled, preached and taught in various Texas counties until shortly before his death, Aug. 17, 1877.

On same pay and rations as privates, a chaplain had multiple duties: religious services, teaching men to read and write, counseling, sick visits, handling the mail, writing letters and reading to illiterates, removal of dead and wounded from the battlefield, baptisms, funerals.

The Hudsons may have been only Texas brothers enrolled in this valuable Confederate service.     (1965)

As of 2017, marker is missing per city of Round Rock & Old Settler’s Association.  The last known marker location was used for the coordinates.