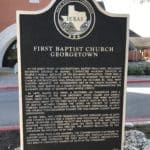 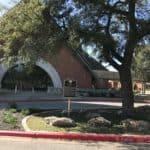 In the early years of Georgetown, Baptist preachers, including Reverend George W. Baines, conducted worship services in people’s homes. Because of the booming population, there was a need for the Baptists to have a place of worship. The First Baptist Church Georgetown was established on October 30, 1866, with thirteen members. The worshippers met in the Union Building, a school that served as a church for several denominations on Sundays located at Seventh and Myrtle Streets.

In 1879, Major W. E. Penn, a southern lay evangelist, held a camp meeting at the “fair grounds” (now called San Gabriel Park) near five springs. Hundreds attended and were baptized, including many of the First Baptist Church. Also in 1879, a group of Baptist women formed the Ladies Aid Society to support foreign missions, education and Buckner’s Orphanage. In 1917, the church congregation formed the Williamson County Baptist Association. +In the 1880s, Mrs. Lizzie Glasscock Talbot donated land at Sixth and Church Streets for a church and parsonage. As membership grew, however, a larger facility was needed. In 1926, Mrs. Helen Boatner Glasscock donated land on Tenth and Main Streets and a new church was erected. The church relocated to this location on Highway 29 in 1987.

With more than 4,000 members, the congregation continues to support local organizations and churches. Through education, missions and outreach, the First Baptist Church Georgetown has been a committed source of faith in the community.     Marker is property of The State of Texas     (2015)