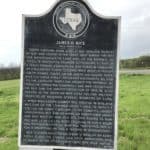 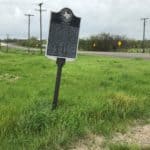 (1815 – about 1875) South Carolina-born James O. Rice migrated to Texas by 1835 and served in the Texas Army during the War for Independence. In early days of the Republic of Texas, he protected frontier settlements as part of a Texas Ranger company. On May 17, 1839, in command of a volunteer force clashing with Mexican troops led by Manuel Flores on the North San Gabriel River, Rice captured vitally important documents related to the Cordova Rebellion against the Republic of Texas. He joined the Somervell and Mier Expeditions of 1842 and the Snively Expedition of 1843. He also served in the Mexican War (1846-48). For military services, he received several bounties of land. When Williamson County was created in 1848, Rice was one of the commissioners named to select a site for the county seat. One of the county’s largest landowners, Rice built his home on Brushy Creek about one mile west of here at a site then known as Blue Hill and later called Rice’s Crossing. He ran a store and was postmaster of Blue Hill post office, 1849-57. For a short time, he had a tanyard in Georgetown. Rice married Nancy D. Gilliland (d. 1860), of an early Texas family. The couple had four daughters. Rice is buried in the Sneed Family Cemetery near Austin.     (1977)