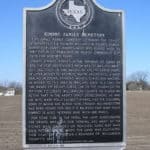 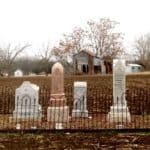 This small family cemetery contains the graves of members of a pioneer Williamson County family. Named for Daniel Kimbro, who was buried here in 1882, the plot remained in family ownership for over one hundred years.

Daniel Kimbro arrived in the Republic of Texas in 1836, the year independence from Mexico was declared. Settling first in San Augustine on the Sabine River, he later moved to Bastrop, where he operated a shop dealing in looms, spinning wheels, chairs, and wagons. He moved to this area in 1846, and lived in a tent on the banks of Brushy Creek. One of the signers of the petition to create Williamson County, he played an active part in the area’s early development. He and his wife, Mary Polly (Gilbert) Kimbro, had six children, some of whom are buried here. Though no headstone has been found for her, it is believed that Mary Polly Kimbro is also interred here with her family.

For some time in the 1950s, the land surrounding the graves was used for farming, and many of the stones were damaged or removed. Some may have been plowed under when the land was cultivated. This cemetery stands as a reminder of Williamson County’s past.    Texas Sesquicentennial 1836-1986

Incised in Base:  Sponsored by Roy H. Bland