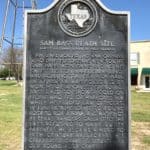 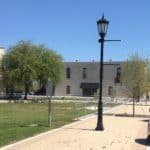 Sam Bass’ Death Site (About 20 yards north of this marker) An uneducated Indiana orphan who drifted to Texas as a youth, Sam Bass won fame racing his swift “Denton Mare,” gambling, and robbing trains. A rich haul in Nebraska was followed by months of reckless spending. Bass liked to shower gold on people who fed or harbored him while he eluded law officers. In July 1878 he came to Round Rock to rob a bank, and was shot by Texas Rangers. Gallant to the last, refusing to name guilty partners, he became a hero to 19th century balladeers. His celebrated grave is situated in Old Round Rock Cemetery.     (1981)

Incise in Base:  Marker Sponsored by the Hoblitzelle Foundation 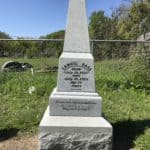 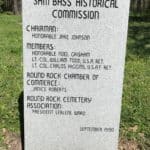 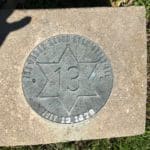 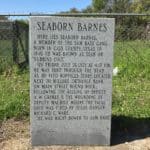 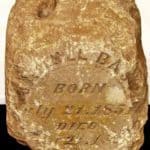