aka Running Brushy, then Brueggerhoff est. 1887 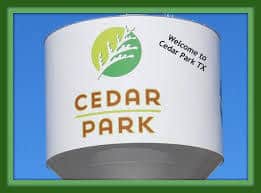 Cedar Park had a population of 10,371 in 1998.  It is another Williamson County community that has grown by leaps and bounds.  It has in its area such large businesses as Dell Computer Corporation, IBM Corporation, Texas Instruments, Samsung, State Farm Insurance Company, and many others.  It has 1.1 million square feet of space in a shopping mall, five banks, and one credit union.