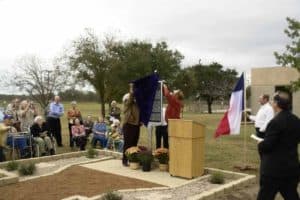 Friendship, farming community in eastern county, closely tied to earlier Allison community, fertile farmlands attracting many Czech and other settlers the latter part of the nineteeth [sic] century.  Early school, church and gin at Allison were succeeded by new ones a short way down stream and when 1921 flood destroyed Allison (also referred to as “Old Friendship”), new school was built on higher ground at Friendship, near juncture of Sore Finger and Willis creeks.  Friendship Grange Cooperative Association was active in 1883; outdoor tabernacle, church, stores and gin were added.  Store was run by Mr. Winningham until 1920, Dick Williams and “Pappy” Moreland succeeding him.  Frank and Joe Cuba built a gin about 1917, and I. J. Mazoch put one up in 1924.  After 1950 the expected construction of Laneport Dam on the San Gabriel necessitated farmers’ sale of their land and homesites; the early Friendship Cemetery was dismantled.  The school consolidated with Granger in 1958.