In 2016, the Williamson County Historical Commission membership agreed a new website was in order to keep up with technology.  To begin this endeavor from scratch, Diane Gaume was contracted to select the website’s template with layout and provide a WCHC member with instructions in creation.  In attempting to document all historical markers and cemeteries, with their GPS coordinates in Williamson County, the “primary” source used was WCHC’s 3-volume notebooks copyrighted in 1999 (see below) with corresponding 1999 map (see below) and 1986 map (see below).  Then the Williamson County Clerk & the Williamson County Appraisal District records were searched for cemetery legal documents, obtaining instrument numbers and property tax numbers.  The findings were checked against information found on websites:  Three Legged Willie, Find-A-Grave, TxDOT database, www.cs.unm.edu/~sheppard/williamson.html, Texas Historical Commission Atlas, The Portal to Texas History, United States Board on Geographic Names, United States Department of the Interior, United States Geological Survey (USGS), & Geographic Names Information System (GNIS).  Consultations with many individuals, to name a few, Wayne Ware, John Christeson, Mickie Ross, Dan Doss, Joe Burgess, Eloise Brackenridge, Bob Brinkman, Dale Flatt, Mariann Laughlin, Karen Thompson, & Patrick Stevens.   Thank you to Kelly Clark and Jan Raesz for their help with posting pictures and writing summaries for the oral histories.  During this time, many miles were driven to historical markers and to a lesser degree cemeteries, to take pictures and make note of the coordinates in order to map as accurately as possible on the website.  Some historical markers are missing.  Research was done to try to find them.  Some of the missing were found and have (or will be) put back for the public to view.   Some cemeteries are on private property and could not be accessed.  Some cemeteries the exact location is unknown or there is nothing left to be found.  On March 13, 2019 this website has gone “live.”  It is a work-in-progress.  Please enjoy!  All feedback is welcome.

[ ] = The “original” information has been added to and/or corrected within the brackets.

Cemeteries:  Usually when viewing a cemetery’s page – provided the information is available – first will be WCAD’s listed address; second will be text from WCHC’s Notebook; and then possibly followed by directions to the cemeteries given over the years by numerous unknown persons.  All the directions were kept for historical purposes.  However, with developments and new road construction a lot of the historical directions will be incorrect.  New updated directions might be given.

(8) = Subject marker used for all other topics, such as individuals, events, communities & institutions 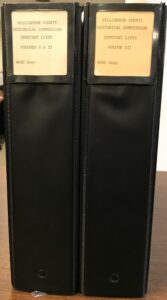