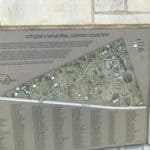 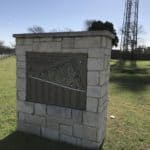 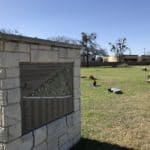 2013 City of Georgetown installed an Interpretive Sign at the cemetery entrance, “The Citizen’s Memorial Garden Cemetery was established in 1906. The cemetery covers an area of 6.8 acres and was originally part of a larger parcel that was sold to the City of Georgetown in 1905 by M. L. Dimmitt, the wife of the deceased J. J. Dimmitt, a prominent early citizen of Williamson County. Historically, the cemetery has been utilized primarily by the African-American community of the Georgetown area, and it has been known by many names, including the “Colored Cemetery,” “Georgetown Cemetery,” “Citizen’s Memorial,” and “Masonic Cemetery.” Some of the earlier burials in the cemetery are likely those of former slaves. The western edge of the cemetery between the boundary fence and driveway is predominantly Hispanic. The earliest documented grave in the cemetery is that of Ann Stiner, who died on September 16, 1906, and the cemetery remains in use to the present day. In December 2013, surveyors working for the City of Georgetown recorded 306 marked graves in the cemetery. Many grave markers are engraved headstones and footstones, but many other graves are marked only with metal plaques provided by local funeral homes, hand-inscribed concrete slabs or boulders, uninscribed headstones, concrete curbing, or simple arrangements of rocks, flowers, and other decorations with no inscriptions. The cemetery also contains at least 511 unmarked graves that are discernable based only on the presence of depressions or small earthen mounds on the ground surface. Many more unmarked graves are believed to be present that do not have any visible surface characteristics. For further information about the cemetery or to inquire about the availability of burial plots, please contact the City of Georgetown Parks and Recreation Department or the Georgetown Cultural Citizen Memorial Association (GCCMA).