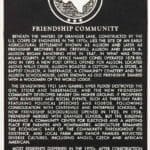 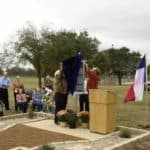 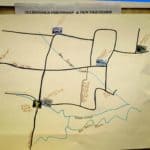 Beneath the waters of Granger Lake, constructed by the U.S. Corps of Engineers in the 1970s, lies the site of an early agricultural settlement known as Allison and later as Friendship. Brothers Elihu Creswell Allison and James A. Allison began ranching here in 1847, in what was then Milam County. A post office named Conel operated 1878-80, and in 1892 a new post office opened for Allison. Located along Willis Creek, Allison boasted a cotton gin, a store, a Baptist church, a tabernacle, a community cemetery and the Allison schoolhouse, later known as Old Friendship, shared with a Woodmen of the World Lodge.

The devastating 1921 San Gabriel River flood destroyed the gin, store and tabernacle, and the new Friendship community developed nearby on higher ground. It prospered with businesses and social events, such as three-day fairs featuring political speeches and rodeos. Following consolidation with Centerville and Enterprise schools, a new Friendship schoolhouse opened in 1923. In 1958, Friendship merged with Granger school, but the building remained a community center for elections and a meeting place for farmers and homemakers. Agriculture remained the economic base of the community throughout its existence, and local farm and ranch families reflected diverse cultures, including Anglo, Czech and African American.

Most residents dispersed in the 1970s, after construction of the Laneport (later Granger) Dam across the San Gabriel River. Allison (Old Friendship) Cemetery burials were relocated to Granger cemeteries. Much of the recorded early life of the community was the work of Stacy Mikulencak Labaj (1903-77), who collected oral histories with longtime residents. Today, a reunion of Friendship families and friends keeps the memories alive for future generations.    (2006)