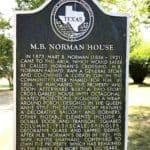 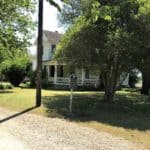 In 1873, Mart B. Norman (1856  1921) came to this area, which would later be called Normans Crossing. M.B. Norman farmed, ran a general store and co-owned a cotton gin in the community later named for him. In 1906, he purchased this property and soon afterward built a two-story cross-gabled house with octagonal-shaped projections, including a wrap-around porch, designed in the Queen Anne style. The second story features a decorative balcony and dormers; other notable elements include a double door and transom, squared columns, fishscale shingles, decorative glass and lapped siding. After M.B. Normans death in 1921, his wife, Nettie (Mayhall), continued to own the property, which has remained in the family for more than 100 years.     Recorded Texas Historic Landmark – 2010     Marker is property of the State of Texas