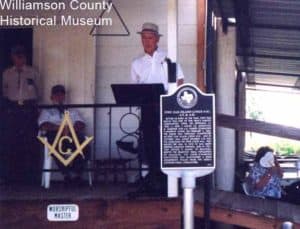 Beaukiss Union Church was built 1891; Drs. Austin and Wm. M. Houghton practiced there; by 1916, town had two drug stores, three general stores, blacksmith shop, gin, Post Oak Island Masonic Lodge, Woodman of the World, Odd Fellows, a school, Joe Simmons and his String Band.  Oil, discovered nearby at Abbott Field in 1930, brought much activity.  The well blew in on Saturday, January 18, on the farm of County Commissioner J. C. Abbott.  The weather had been unusually cold since before Christmas, reaching four to six degrees below zero.  On January 15 there was snow and sleet followed by another norther.  In spite of the bitter cold and the ice, sleet and snow which covered the roads, three thousand or more people visited the well on Saturday and Sunday.  Most out-of-county visitors were housed in hotels in Taylor.  Beaukiss School closed by order of the County Board of Trustees August 12, 1947.