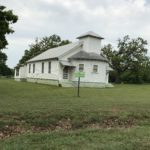 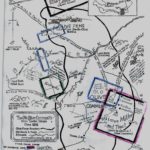 Lawrence Chapel, first called Cross Roads (see:  “Cross Roads, later Lawrence Chapel. Cross Roads had a post office November 1, 1858, with Edmond Laurence (son of Adam Lawrence who changed the spelling of his name from “u” to “w”) as postmaster; office was discontinued January 23, 1867.”).  The community had an early store put up by James Olive and a school taught in 1858 by Frederick “Fell” S. Wade, who later wrote of the community and of Adam “Ad” Lawrence who founded it.  The store-post office stood east of the school, along with a blacksmith shop nearby.  Edmund Lawrence, Adam’s eldest son, ran the store along with members of the Olive family.  Silas Abbott put up a store and gin south of Lawrence Chapel on the road to Beaukiss about the 1870s.  Another gin was run by Jim Laurence (no relation to Ad Lawrence) between Lawrence Chapel and Shiloh, later run by Mr. Arnold, to which was added steam power and a wheat and corn mill.  Prior to that time, Ad Lawrence sent his corn and wheat to the Star Mill at Circleville.  Other settlers included Henry Inlo Layne (1853), Greenup Kuykendall, and the Slaughter family.  The community saw new life in 1930 when the Abbott Oil Field was brought in.  The first well blew in January 16, 1930, produced heavily about a year, after which production was low.  Pumpers still operated in 1970.  The historic Methodist Church at Lawrence Chapel remains in use adjacant to the early community cemetery.  The log home built of enormous hand-hewn timbers by Ad Lawrence was standing in 1973, covered over and used as a barn on the place of G. Carl Lawrence, a descendant.  The school consolidated with Thrall in 1950.